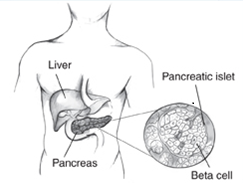 Diabetes is a metabolism disorder where the beta cells present in the islets of pancreas make insulin and release it into the blood. The condition occurs when the body is not able to make or use enough insulin.

The two main types of diabetes are:

Liver Cirrhosis refers to the scarring of the liver tissue. It is a slowly progressing disease caused when live liver cells divide and multiply resulting in the cluster formation of liver cells. Liver Cirrhosis is the chronic stage of liver failure and at present can be treated by liver transplantation process.

A cardiovascular disease (CVD’s) refers to all the conditions related to heart and blood vessels caused due to various genetic or environmental factors or due to hypertension, dietary issues, smoking etc. The main types of CVD’s are:

COPD is a lung impairment causing difficulty in breathing. It is caused due to smoking, polluted air, duct or chemicals. The symptoms of the disease include cough with mucus, fatigue, breathlessness, fatigue, Chest congestion, wheezing etc.

Asthma refers to a conditions where air passage to the lungs is interrupted resulting in coughing, breath shortness, wheezing and chest congestion. At present it can be treated using certain medications though that can also prevent the symptoms instead treating the disease from the core.

Depression is the brain illness which may be caused due to genetic, environmental, emotional factors. It may also be caused due to medical illness or stress and thus affecting overall physical health.